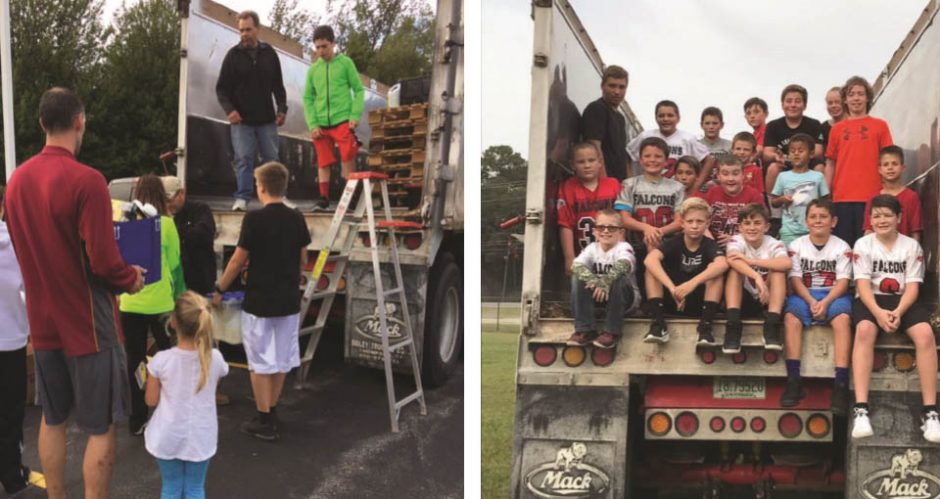 We Northeast Ohians love to complain about our winters, but let’s face it, we wear our ability to endure the drifts of snow for months like a badge of honor (as opposed to those wimps in the South!! Ha!). But, all in all, we don’t really have a whole lot to complain about. A thunderstorm now and then, lots of snow in the winter and an occasional tornado doesn’t amount to much in the way of catastrophic damage. When I see images of what is left in TX or FL after hurricanes like Harvey and Irma roll over our country, I cannot fathom what people are going through.

I was fortunate to be able to offer some help in a small way when my son’s former youth football league contacted me to see if Truckmen could provide some assistance. Some former teammates had moved to Huffman, TX two years ago and now found themselves in the middle of the aftermath of Harvey. Their town was severely flooded in areas and needed some help.

Thanks to one of the parents generously offering to fill his 32 foot dump truck and take whatever supplies we could gather up to Texas himself, the Perry Youth Football League (PYFL) started to get the word out to “Fill the Truck”. Truckmen called a few wonderful customers who donated some boxes to load goods in. Thank you to International Paper in Madison and Polychem in Mentor for stepping up and providing cartons on such short notice.

The Perry community and a few other area youth football leagues brought enough supplies to just about fill that entire dump truck in less than a week. Truckmen and many other organizations and families chipped in some money to help Mr. Collins with his fuel bill to get to Texas and back. The truck arrived last week and was met by many Huffman Youth Football and Cheer (HYFC) players, who had the truck unloaded and on its way to being sorted and distributed in just a few hours!

The “Fill the Truck” project was a great success. Besides all the goods that were delivered, PYFL was able to give about $1000 in Home Depot gift cards for HYFC to replace appliances and supplies at their field and concession stand that had been ruined by the floods. It was amazing to be a part of this effort and see so many people come together to help.